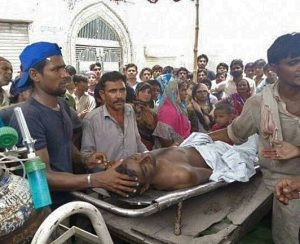 A Christian sanitation worker in Pakistan died on Thursday (June 1) after Muslim doctors refused to treat him for poisonous gas he was exposed to in a sewer.

Doctors at Civil Hospital Medical said they refused to treat 28-year-old Irfan Masih because they were fasting and he was unclean.

Family members cleaned Masih’s body, after which the doctors sent for an oxygen cylinder.  But the cylinder was empty and, before they could arrange another, he died.

The doctors were arrested and accused of criminal negligence and manslaughter for allegedly refusing Irfan Masih treatment.

Pakistan Medical Association Officials later demonstrated against the arrests and the case filed against the doctors, claiming that the accusations were fabricated.

Though Christians account for 90 percent of sewage workers and an even higher percentage of sweepers, they make up only 2.45 percent of Pakistan’s population, which is more than 95 percent Muslim.