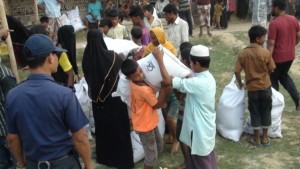 An estimated a quarter of a million Rohingya refugees have been forced to flee Myanmar due to conflict and burning of villages. No choice remained but to flee to neighbouring Bangladesh. Without basic everyday essentials, the Rohingya are living in squalor without food, shelter or even vital medical attention.

The Rohingya are considered some of the most persecuted minorities in the world, and the current atrocities only demonstrate their continuous suffering. Rejected and unwanted, this ethnic minority group face ostracization. They are denied basic citizenship rights in a country which they have called home for generations.

Yet Christian Rohingyas are doubly disadvantaged. The country refuses to acknowledge them and the Rohingya tribe rejects Christians who’ve converted from Islam.