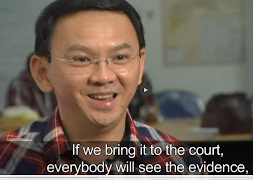 Indonesia took a huge leap backwards in its reputation as a moderate Islamic democracy when a court sentenced the Christian governor of Jakarta, Basuki “Ahok” Purnama, to 2 years in prison for “blaspheming” the Koran.

Islamic extremists, opposed to having a non-Muslim lead the city, organized massive demonstrations against Ahok.

The two-year prison sentence was shocking as prosecutors had recommended a two-year probation.   The verdict is certain to embolden the Islamic extremists who erupted in jubilation at its announcement.

Saying the trial was purely legal and not political, the lead judge Santiarto said Ahok’s comments had degraded and insulted Islam, according to The Associated Press.

Huge street protests against Ahok in the past six months are one sign of a hard-line Muslim movement in Indonesia. Another sign is the habit of vigilante groups preventing Indonesia’s religious minorities from practicing their faith.