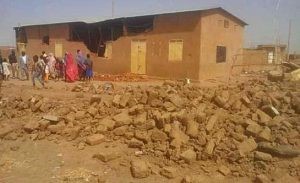 Authorities in Sudan demolished a church building yesterday (May 7) as Christians were preparing to worship.

Authorities notified church leaders of the impending demolition just a week prior. It was one of at least 25 the government designated for destruction in an order last year claiming the churches were built on residential or government land.

Mohamad el Sheikh Mohamad, a general manager in the Ministry of Planning, urged that it be implemented immediately.  It targets a wide range of denominations, from Catholic to Pentecostal.

Christians in Sudan complain that the Islamist government of Omar al-Bashir is targeting their buildings while favouring Muslims and their mosques.

The Sudanese Ministry announced in April 2013 that no new licenses would be granted for new churches in Sudan, citing a decrease in the South Sudanese population after South Sudan seceded from Sudan in 2011, when Bashir vowed to adopt a stricter version of sharia (Islamic law) and recognize only Islamic culture and the Arabic language.